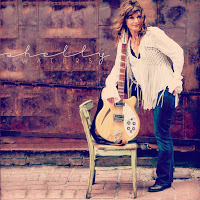 Remember this name: Shelly Waters. Her new self-titled recording showcases a voice that demands adjectives such as huge and wide ranging. Best of all, she really knows how to sing. These twelve tracks capture her in many moods. “Drink the Water” is a gritty and grungy song in which the soulfulness of an old Motown record meets the muscularity of a Stax recording with Waters wailing above the Hammond B-3 about the man who done her wrong. She gets saucy on “Red Hot Red,” a retro road song with surf guitar, gets bluesy in old-style country way on “Jackpot,” covers Neil Diamond’s “Red Red Wine” like it’s a six-tissue weepy, makes the miles melt away in the (ahem!)  “MyFirst Car,” and goes all Emmy Lou-like on “Evangeline.” Waters milks emotions from her material, sometimes in a commanding way, as she leads a bold electric song like “Blood, Sweat, and Tears,” and sometimes by making herself vulnerable, as in the lovely “Louisiana Rain.” ★★★★ (October 2017, Off-Center Views)